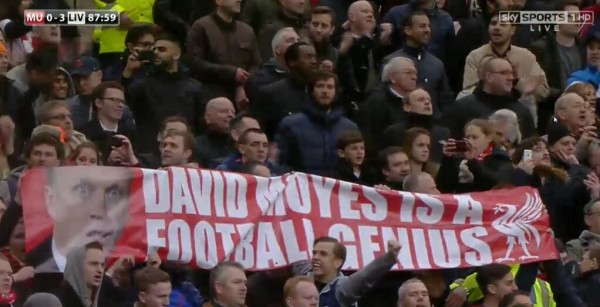 by Dave in Football
With three games still to go (a Merseyside derby plus two very winnable games against Fulham and QPR) we've already matched last season's points tally and more importantly have scored 20 more goals than last season. Not bad for a "transitional year". Our goal difference in the last two seasons was +15 and +7, so this season we have a better goal difference than those two season's combined.
Liverpool F.C. Transfers

Gary Neville – Who Saw That Coming?

by Dave in Football
When Sky announced they’d signed up G Nev as a pundit I must admit I groaned, it was bad enough putting up with Andy Grey’s anti-Liverpool bull during commentary/analysis I could only imagine how Neville, who I’ve always thought of as Manchester United’s equivalent to Carragher — underrated by [...]
Carragher Liverpool F.C. Media Neville Pundits

You Don’t Win Anything With Kids

by Dave in Football
Keep bringing the kids through I say … I’d rather see the likes of Sterling, Suso, Yesil, Pacheco etc get a chance to show they have the quality (or not) than spend £15-20m on a striker who will not be world class, because even if we had £50m to spend no world class striker will join us in January [...]
Borini Liverpool F.C.

by Dave in Football
I saw this on 101GreatGoals this morning: It’s a lot more than I expected from the Sun, especially after Kelvin’s MacKenzie’s half-hearted “I published in good faith” apology from yesterday, here’s what he had to say incase you haven’t seen it already: Today I offer my profuse apologies to the [...]
Hillsborough Liverpool F.C. The Sun

by Dave in Football
I’ve just finished reading the Summary section of the recently published HIP while I should be working.  I went into it prepared for some ridiculous stories of incompetence and probably willful perversion of justice after the fact, but I am genuinely shocked at the levels of both alluded to. [...]
Hillsborough Liverpool F.C.

by Dave in Football
At the start of the Summer my main hope for LFC was a proper clearout, in the three seasons since a rare serious title bid we’ve struggled to sign players who improved the starting XI, leaving us with a squad of decent Premier League players, without any exception talent.  Which might go some way [...]
Liverpool F.C. Transfers

by Dave in Football
What a great Summer for Liverpool!  £4m for N’gog, I thought he’d be another piece of deadwood we’d struggle to give away.  By my count that’s over a dozen players shipped out either on loan or permanently this Summer.  Cole & Aquilani out on loan to Lille and AC Milan respectively.  Konchesky, [...]
BBC Kenny Dalglish Liverpool F.C. Roy Hodgson Transfers

by Dave in Football
I really can’t believe that this isn’t photoshopped, Sammy Lee appears to be midway through transformation into a werewolf whereas Hodgson seems to be channelling Hermann Munster:)
Liverpool F.C. Roy Hodgson Sammy Lee

Although I’ve never been a fan of TalkSport radio, I have to confess I do enjoy their videos 🙂

It’s been a fucking mental 24 hours at Liverpool, with the official site dropping this bombshell in the late hours of Wednesday night:

The Board of Directors have received two excellent financial offers to buy the Club that would repay all its long-term debt. A Board meeting was called today to review these bids and approve a sale. Shortly prior to the meeting, the owners – Tom Hicks and George Gillett – sought to remove Managing Director Christian Purslow and Commercial Director Ian Ayre from the Board, seeking to replace them with Mack Hicks and Lori Kay McCutcheon.

This matter is now subject to legal review and a further announcement will be made in due course.

Meanwhile, Martin Broughton, Christian Purslow and Ian Ayre continue to explore every possible route to achieving a sale of the Club at the earliest opportunity.

Ironically this news comes on the same day that the much hyped “Dear Mr. Hicks” viral was launched – minus any celebrity of note – I struggled to watch it to the end, and as a Liverpool fan I am embarrassed to have this sanctimonious whining being connected to my club.

Finally, yesterday morning I wake up to the news that a sale has been agreed and some dynamite quotes from previously quiet chairman Martin Broughton

I am delighted that we have been able to successfully conclude the sale process which has been thorough and extensive. The board decided to accept NESV’s proposal on the basis that it best met the criteria we set out originally for a suitable new owner. NESV’s philosophy is all about winning and they have fully demonstrated that at Red Sox. We’ve met them in Boston, London and Liverpool over several weeks and I am immensely impressed with what they have achieved and with their vision for Liverpool Football Club. By removing the burden of acquisition debt, this offer allows us to focus on investment in the team. I am only disappointed that the owners have tried everything to prevent the deal from happening and that we need to go through legal proceedings in order to complete the sale.

I think it is a great pity that at the end of an exhaustive process that has been seeking a competitive bid, that they are not going to take the last opportunity to be the ‘good guys’ and pass over Liverpool to the right owners, that is what they promised to do, what they said all along they would do.

When I took the role they gave a couple of written undertakings to Royal Bank of Scotland – that I was the only person entitled to change the board and that they would take no action to frustrate any reasonable sale, I think they flagrantly abused both of those written undertakings. I have the casting vote.