« The Circus
TIE Fighter: The Movie »

I saw this on 101GreatGoals this morning: 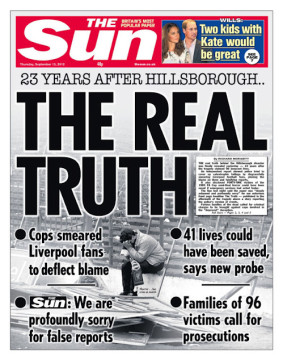 It’s a lot more than I expected from the Sun, especially after Kelvin’s MacKenzie’s half-hearted “I published in good faith” apology from yesterday, here’s what he had to say incase you haven’t seen it already:

Today I offer my profuse apologies to the people of Liverpool for that headline. I too was totally misled. Twenty three ago I was handed a piece of copy from a reputable news agency in Sheffield in which a senior police officer and a senior local MP were making serious allegations against fans in the stadium. I had absolutely no reason to believe that these authority figures would lie and deceive over such a disaster. As the Prime Minister has made clear these allegations were wholly untrue and were part of a concerted plot by police officers to discredit the supporters thereby shifting the blame for the tragedy from themselves. It has taken more than two decades, 400,000 documents and a two-year inquiry to discover to my horror that it would have been far more accurate had I written the headline The Lies rather than The Truth. I published in good faith and I am sorry that it was so wrong.

My biggest problem with this “apology” is how he seems to think he was a victim in this.  This skips over the fact that this was and is the standard operating model for the likes of the Sun/Star/Daily Mail — twisting facts to create a sexy headline is what they do nearly every day, just take a look at http://tabloid-watch.blogspot.co.uk/ to see some of the more outragous lies in recent years.  If they had to apologize everytime they printed unsubstatiated stories or misleading headlines on the front page they’d never have time to do anything else.

Twenty-three years ago The Sun newspaper made a terrible mistake. We published an inaccurate and offensive story about the events at Hillsborough. We said it was the truth – it wasn’t.

The Hillsborough Independent Panel has now established what really happened that day. It’s an appalling story and at the heart of it are the police’s attempts to smear Liverpool fans. It’s a version of events that 23 years ago The Sun went along with and for that we’re deeply ashamed and profoundly sorry. We’ve co-operated fully with the Hillsborough Independent Panel.

An editorial in today’s Sun says:

The Sun’s reporting of the Hillsborough tragedy 23 years ago is without doubt the blackest day in this newspaper’s history.

Nothing can excuse The Sun’s Page One presentation, under the headline The Truth. It was inaccurate, grossly insensitive and offensive. This version of events was not the truth.

I get why people connected with Liverpool are so upset over this particular instance of tabloid journalism, but it annoys me that the same people seemingly don’t care about the millions of other lies printed on the front page of tabloids every single day, and more to the point seemingly lap them up oblivious to the irony that somewhere out there is another group of people equally offended by those very headlines.  If you are not equally angry everytime the Daily Mail front page proclaims “New miracle cure for <something>” then you need to ask yourself why that lie is any different to the Sun passing off the Police story of fan hooliganism as the truth.

I don’t buy the Sun, not because of their reporting over Hillsborough, but because all tabloids are full of **** .  It depresses me greatly that I live in a society that laps this up and considers it “news”, especially in a age where information is freely available to anyone with an internet connection.

Ten years ago you would only have seen the parts of the Independent Panel’s report that the media wanted you to see; todayanybody with an internet connection can download the actual report and make up their own mind, if they can be bothered.

Every tabloid was as taken in by the police’s story, just as the Sun were, so don’t reserve your hatred for just one example of the cancer of journalism that is the tabloid press.  The Liverpool Daily Post (Hat tip to Football365 as I wasn’t aware of this particular quote before today) reported it thusly:

At best it was unfettered zeal. At worst it was uncontrolled fanaticism and mass hysteria which literally squeezed the life out of men, women and children. This was yobbism at its most base. People without tickets who had no right to be there were crushing to death their fellow Scousers. When it comes to apportioning blame, the accusatory finger can also be pointed at Liverpool. Scouse killed Scouse for no better reason than 22 men were kicking a ball.

Until yesterday I blamed the Sun as the source of the lies, I figured they just fabricated the story out of thin air and/or manipluated some quotes to get the story they wanted and the other papers followed suit.  Today I’m educated, the police are the source and the tabloids just did what tabloids do.  Nearly all the blame I attributed to the Sun for “their” lies now finds itself at the door of the SYP officers who masterminded this.  I genuinely don’t know how they’ve lived with this secret for all these years and the only way there can be justice is for them to serve significant jail time.

This entry was posted by Dave on September 13, 2012 at 1:27 pm, and is filed under Football. Follow any responses to this post through RSS 2.0.Both comments and pings are currently closed.