« You Don’t Win Anything With Kids
Why Doesn’t MTV Play Music Videos Anymore? »

Gary Neville – Who Saw That Coming? 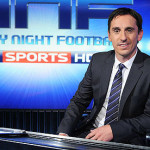 When Sky announced they’d signed up G Nev as a pundit I must admit I groaned, it was bad enough putting up with Andy Grey’s anti-Liverpool bull during commentary/analysis I could only imagine how Neville, who I’ve always thought of as Manchester United’s equivalent to Carragher — underrated by most, absolutely loves the club, dedicated pro, keeps out of the headlines and is the living embodiment of the club, whether you like it, or hate it you’ll likely feel to same towards that player — but deep down we know that if the players had spent their careers at the opposite clubs our feelings for both would be reversed also.

It feels like Neville has been on our TVs forever already, and not in a bad way — he is the single pundit across all TV channels that I’m actually interested in hearing what he has to say.  He’s shown that he can put aside club loyalty, both praising rivals and criticising his beloved Manchester United.  Most importantly he’s shown a level of intelligence in his analysis that is normally reserved for niche blogs rather than prime-time television.

I loved Jamie Redknapp as a player, but he adds absolutely nothing to the sum of human knowledge when you put him on as a pundit.  I think back a few years ago and I’m sure Hansen used to actually put some content into his punditry on MOTD, but that seems to have completely dried up in the past couple of seasons too.  A plant could do Gary Lineker’s job for all he adds to the show.  It really is kind of sad to see such greats of football show such little insight into the modern game.

I’m quite excited by the thought of a Carragher – Neville punditry team in 2 or 3 seasons time, I was surprised by how well Carra fared during the Euros this Summer, at one point I seem to remember the main presenter trying to shut him up because he was being too interesting/controversial and not towing the party line by just throwing out vague throw-away statements during the half-time break.

Liverpool v Man United, 2014-15 season — Carragher and Neville providing analysis of the game on Sky, it’s a longshot as I suspect Carra will have a role at the club (if he wants it) when he does retire, but I’d pay just to see that — let alone the match itself.

I’m sure the BBC will still be trotting out the dead carcass’ of Lineker, Hansen, Shearer & Lawro though :/

This entry was posted by Dave on October 2, 2012 at 6:55 pm, and is filed under Football. Follow any responses to this post through RSS 2.0.Both comments and pings are currently closed.