« TIE Fighter: The Movie
Gary Neville – Who Saw That Coming? »

You Don’t Win Anything With Kids

Keep bringing the kids through I say … I’d rather see the likes of Sterling, Suso, Yesil, Pacheco etc get a chance to show they have the quality (or not) than spend £15-20m on a striker who will not be world class, because even if we had £50m to spend no world class striker will join us in January short of a miracle that sees us clearly a favourite for one of the CL places. 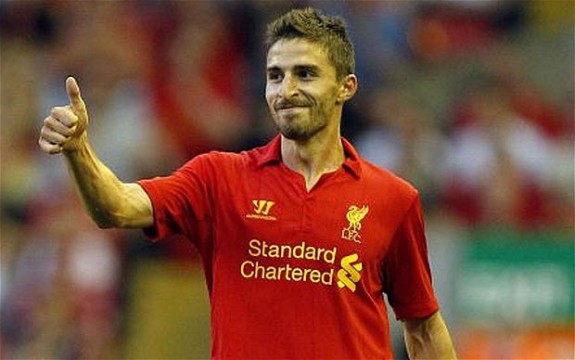 Even then how many truly great strikers are there that would be available, none of the players I see linkedto us fall into that category and would no more be a guarantee of success than Borini (9 goals in a little over 20 Serie A games last season for a struggling Roma team let’s not forget).  Incredibly, many seem to have already written him off after half a dozen games in a team adapting to a new formation and a new style of play!

Just look at Hazard’s quotes the other day … pretty much said he’d have joined Spurs if they had made it into the CL this season.

It’s true that Tottenham tempted me because it was a young team which was third in the league, unfortunately, the end of the season did not go well. They did not reach the Champions League, which tipped the balance.

If we want to get back to the summit of English football we cannot outspend Chelsea and Man City attempting a “quick fix” as they did to move from midtable to the summit of the game.  We have to build a team the traditional way, which means seeing more quality players like Kelly, Shelvey and Sterling coming up from the academy and showing that they have the ability to be a first team player, and those who fail to show that potential need to be moved on permanently (sorry Spearing, but as hard as you try — and you really do — it’s just not going to happen).

With the squad as it is we are going to see chances for all these young “stars” over the course of the season.  For me that’s far more exciting a prospect than any of the signings I see mentioned (including the recall of Carroll, unless we recall him just to sell him).

The priority for January has to, once again, be getting rid of the senior players who are not good enough: Downing, Carroll, Spearing, Cole.

I would be more than happy to finish the season having seen the likes of Morgan, Suso, Yesil & Pacheco make a dozen Premier League appearances up front as backup for a first choice front 3 of Suarez, Borini and Sterling … then we can move into the Summer transfer window knowing whether any of them have a future at the club, if they do I prey we don’t bury their hopes of first team football with new signings.  If they are going to be good enough to play for Liverpool at 24 they will be good enough now, I can’t think of any players who were rubbish in their teens and suddenly developed into a great player in their early-mid twenties.

If we’d signed Sterling for £15 million in the Summer everyone would be raving about what a good signing he was and the instant impact he’s had on the team, instead they are complaining that we “only” spent £20m on new players.

If they are not going to get a chance because we keep on buying “ready made” solutions what’s the point in even having the academy?  Look at Tom Ince at Blackpool now, maybe it’s playing at a lower standard but what I see is very exciting, but he never got a look in at Anfield because a glut of very average senior players in those positions.  I expect to see Blackpool in the Premier League next season and it will be interesting to see how he fares then, I’m already left wondering whether he might have been in Rodgers first team plans this season if he were still at the club.

If someone like Oscar or Hazard wants to come to Anfield on massive wages with a big fat transfer fee that is one thing, but please let’s not just start throwing money at second rate players just because they are high profile/foreign.

For example, Borini’s goal scoring record in Serie A is better than Huntelaar’s (and Huntelaar played for a very good Milan team at the time), Borini’s best days are in front of him, Huntelaar’s are behind him, and he only cost £10 million.  Yet I get the impression many would swap Borini for Huntelaar in a heartbeat.  If Borini was English, he’d have been labelled “the new Wayne Rooney”, have a dozen England caps and cost £20m plus .. and most importantly to the fans it seem: he’d have a much higher profile.

This entry was posted by Dave on September 26, 2012 at 7:26 pm, and is filed under Football. Follow any responses to this post through RSS 2.0.Both comments and pings are currently closed.