I finally finished the second (and final) season of V (2009).  It's been a bit of a chore making it through this season to be honest and there wasn't really a pay off at the end to have made it worth it in my opinion. 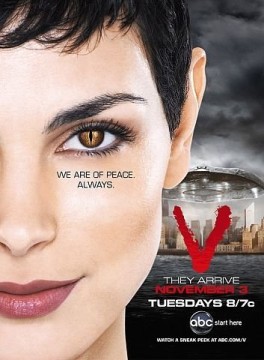 I had fond memories of the original V mini-series, having caught a re-run of it during my early teens. After 22 episodes I have to conclude that this is the most inept resistance movement in any TV series I have seen to date.

Erica Evans is one of the most frustrating characters ever put to screen, despite being the leader (somehow) of a multi-national resistance movement fighting for the future of the entire human race she rarely has any motivation other than "boo hoo, my whiney emo kid is up on a spaceship completely unharmed by the visitors".  As for Tyler himself, I just wanted to reach into my screen and punch him everytime his appeared in a scene.  Looking further afield to Erica's co-conspirators they share her rediculous short-sightedness whenever it comes to a family member.

By the time the finale rolled around, containing two such occasions itself, I had long since lost count of the number of times an elaborate plot to bring down the Visitors was scuppered by one of the resistance members betraying their cause to the Vs to protect a family member, and often followed shortly by a rousing speech about "sacrifice" just to rub salt into the viewers' wounds.  Each time greeted with an audible groan and a muttering of "Get some fucking perspective" by this viewer

Speaking of the finale, the final 15 minutes was absolutely mental, it's just a shame they wasted the rest of the episode with the same tired formula repeated in nearly every other episode this season.  In this episode it's Lisa's turn to throw away an opportunity to win the war through nothing but stupidity, I could barely contain my geek rage as it happened.  Why would the writers do this to me?

It's really no surprise the show was cancelled mid-season, it's such a shame that after a promising start to season 1 the writers failed to take the story anywhere interesting at all.  The second season was a complete waste of time until the final 15 minutes.

5/10 – Wasted opportunity.  You're better off watching the original series.

This entry was posted by Dave on February 12, 2013 at 9:27 pm, and is filed under Film & TV. Follow any responses to this post through RSS 2.0.Both comments and pings are currently closed.