A Piece of Gaming History Unearthed

Before there were achievements OCD gamers like myself resorted to keeping written records of our achievements … witness the written record of my first season in Sensible World of Soccer — despite my claims it’s the “1990-00” season it’s clearly the first season of the game, so that’s either 1994-95, 1995-96, or 1996-97 season as I bought all three:) 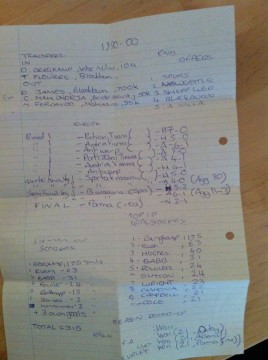 This entry was posted by Dave on June 23, 2012 at 8:14 pm, and is filed under Gaming. Follow any responses to this post through RSS 2.0.Both comments and pings are currently closed.