Arrived in Raleigh on my 6 week assignment out here 6PM local time.   The weather’s certainly a lot better than what I left behind in the UK.

On arrival at Raleigh-Durham International a courtesy bus took us to the Hertz Rental lot, which was about the size of Winchester, and after much haggling I manged to haggle an upgrade from the standard Nissan Versa that IBM will pay for to Dodge Charger for a paltry $7 per day.  I was actually after a Ford Mustang, but they didn’t have any on-site, so it was a toss up between a Dodge Charger or a Chevrolet Camaro.

Having agreed a discounted $7/day upgrade for the Mustang before it turned out they didn’t have one on site Hertz wanted an extra $25/day for the Charger or the Camaro.  They came down to $12/day without much trouble, but given I’m here for 41 days I’d be looking at a hefty bill.  Eventually I said I just couldn’t justify that kind of outlay and would “have to settle for the Versa, because the missus would kill me if I’d paid $500 just to get a better car”.  What would you know though, I quick chat with the supervisor and I could have the Charger for the $7/day upgrade we’d previously agreed for the Mustang. 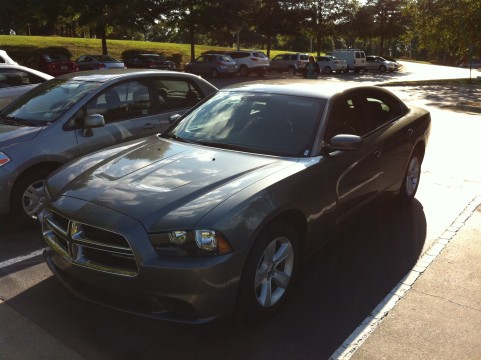 We had a bit of a mission getting to the hotel despite it only being a 5 mile trip, Hannah was navigating so I think it’s safe to lay the blame with her entirely 🙂  Somehow we managed to miss the on-ramp to the I40 and ended up spending a good half-hour trying to get back to the I40!

This entry was posted by Dave on August 21, 2011 at 8:14 pm, and is filed under Life. Follow any responses to this post through RSS 2.0.Both comments and pings are currently closed.